I remember when I was young living between two next-door neighbors that were teenagers and were total metalheads. They had all these records and all this music, and I wanted to be just like them. I don’t know what it was about the stuff they were listening to, but it just turned me on to music right away, at a very young age.

This was also in correlation with MTV which was brand new to the music/television scene and was a huge part of the culture of growing up an 80s kid. That’s where I first saw a Whitesnake music video, I think it was the song “Give me all your love.” What I do remember clearly is the drummer, Tommy Aldridge doing his thing with a double bass and I was fascinated. After that, I got ahold of an Iron Maiden “Life After Death” VHS tape from that neighbor kid, and from there on out, I was rockin’ whenever I could. I was grabbing broomsticks, jumping off furniture and playing air guitar all the time.

I got my hands on as much music as I could. There was a mailman that lived across the street from us, and I don’t know where he got this stuff, but he had this huge paper bag full of brand new cassette tapes. I would do any chore he had around the house in exchange for one of those tapes. I cleaned his birdcages, mowed his lawn, whatever he needed just to add to my collection and feed my newfound music habit. Through this, I acquired some of the greats like Ozzy Osbourne, Bon Jovi, Quiet Riot, Twisted Sister, and so many more. I read everything on the inserts and I just worshipped these artists and their music.

My whole life became music I just loved the way that it moved me. As a kid, I never quite felt like I fit. I always felt a little trapped inside myself somehow, and I feel like the music freed me. It took me to a place where I felt like I could just be myself. I could let loose and be present. Music fixed me.

As I listened to more and more music and became absorbed in that world, I organically became inspired to start hitting stuff. My first drum set was actually made up of my mom’s garden accessories. My mom had a full-on garden with tons of pots and pans and things. I grabbed a few of these one day, set them up in my room on a towel, and I just started beating on stuff!

When I first got into music class in 3rd or 4th grade, I initially wanted to play saxophone because my dad played sax in high school, but my parents couldn’t afford it. The sax was $40 a month and the snare drum was only $16, so I asked to play the drums and they agreed. I was so attached to this snare. I remember strapping it to my skateboard and literally rolling it to school every morning because I had to walk, there was no storage at school.

From here, my dad built me a drum kit around the one snare that I had. We couldn’t afford a full drum kit, but my dad was really crafty, he could build anything. He built the bass drum pedal with wood, heavy duty rubber bands, and a rock chicken wired to the end of the kick drum. He made cymbals out of coffee can lids. It was just really inventive. Some of my favorite early music memories are of my dad jamming with me on this set he built me. 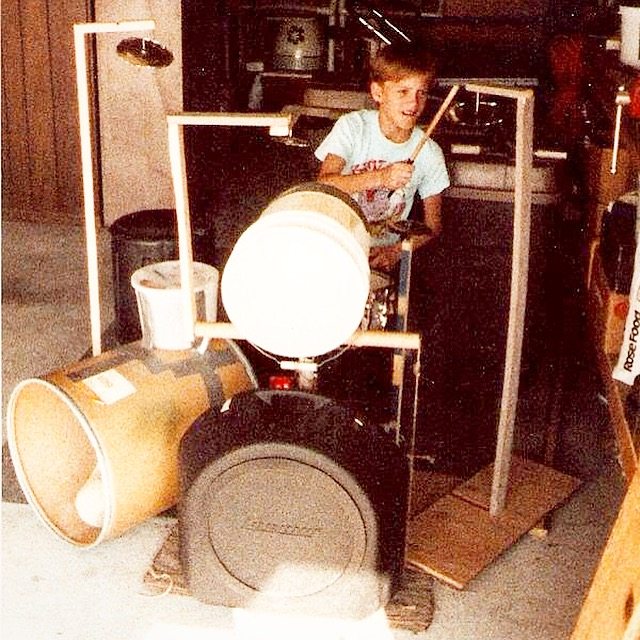 So in beginner band in elementary school, my teachers noticed that I had a natural talent for playing the drums, but it was quickly acknowledged that I wasn’t very good at (and had no interest in) reading music. Music was more of a feeling for me rather than something cognitive. I was always thinking about the feeling, not counting beats.

I was not a good student, I was always thinking about music. I just couldn’t wait to get out of class to go home and listen to music and play my drums. I got through music class with my natural ability and playing all of the music by ear. I even made it into the Fontana City Honor Band, and all of those kids knew how to read music, but I still made it by listening to what they were playing and then jumping in.

Around this time I had my first musical awakening experience playing in front of an audience. We were playing the Christmas concert and there was this song about dinosaurs, and the drums were really heavy and trombones were screaming, and it just sounded like a brachiosaurus and a t-rex battling it out. The drum parts weren’t complicated but they were loud and powerful, and I played those drums about as hard as I imagine real dinosaurs would have been fighting! After that song, I remember everyone standing up and clapping and I thought to myself, “This is it. This is what I want.”

After feeling so separate on the inside and then watching something amazing happen to the people in this audience, it felt like I was being noticed for the first time. That experience set the course for music to become my obsession…

2 Responses to "How I Found Music…"